I don’t have a favorite PHA hillclimb, as they all are my favorites for one reason or the other.   But I have to say that Duryea is my favorite as far as overall driver experience goes.  It’s 2.25 miles long, and the lower half (which we run for the Pagoda hillclimb) is tight turns, while the upper half is more or less a straight.  Even though I have a low horsepower car, both halves of the course are a lot of fun, and both halves are challenging.

This event typically fills up (100 driver limit) within a few hours of registration opening.  Turnout was a bit low this year due to cancellations, likely due to the weather forecast.  More on that later. 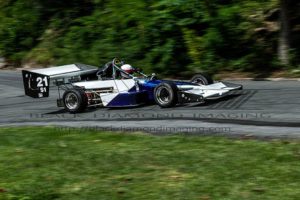 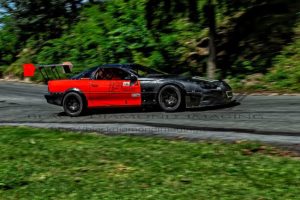 We had great weather conditions on Saturday, but unfortunately had to stop with group 1 at the end of the day.  There were a couple of incidents, mostly mechanical, that meant group 1 ran longer than expected, and there wasn’t enough time to run group 2 before we needed to re-open the road to the public.

The plan was to start with group 2 on Sunday, but the weather did not cooperate.  Hurricane Henri rolled though our area and left behind some showers and very dense fog, especially at the top part of the course past the Pagoda.  The start of the event was delayed in the hopes that the fog would clear, as visibility past the Pagoda was too poor to allow us to run safely.  Remember above that I said it was a “more or less straight” – you must be able to see it to run it safely at speed.

The organizers waited until after lunch, but the fog never lifted for more than a few minutes at a time, and runs in those conditions were not an option.  However, since the lower half of the course was clear, if wet (it was still raining), and the workers were game, those of us that stuck around were given the opportunity to take some non-timed runs on the first half of the course.  This is basically the course that we run for Pagoda.  I’m never one to turn down a run just because it’s raining, and neither were the rest of the drivers who stuck around, and we all had a blast playing in the rain.

My times on Saturday were dismal.  But on Sunday, in the rain, I felt like I was finally driving  the car well again.  Hopefully my regained confidence will mean I drive the car as it’s meant to be driven at our next event. 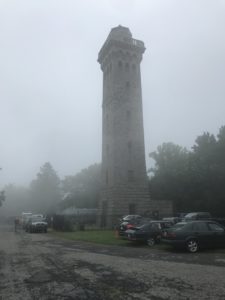 Here is a gallery of Duryea pictures from Wayne Domkowski http://blackdiamondimaging.com/