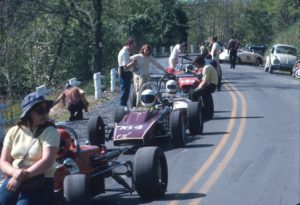 PENNSYLVANIA, THE BIRTH OF HILLCLIMBING

At the beginning of the 1900’s, prior to World War I, the Matheson Car Company tested its cars on East Northampton Street’s steep grade as it snaked itself up the side of the mountain just east of Wilkes-Barre, Pennsylvania. Almost immediately other car companies followed suit and came to the mountain to test their own cars. With the limited power available at the time, it was a real challenge for cars just to make the top of the hill. Soon, however, as we might expect, competition began as companies and their drivers challenged each other to negotiate the hill in the quickest time.

During the summer of 1906, the “Memorial Day Hillclimbing Derby” took place that attracted a large crowd of spectators who gathered to watch the cars and drivers face the hill. H.N. Harding in a 45 hp. Daimler won the event with a time of two minutes and eleven seconds. The “Derby” continued as an annual affair as it became recognized locally, nationally and even internationally as a challenging motor race that taxed the best of cars and the skill and nerve of drivers. Attendance at some of these early events was said to have exceeded 70, 000. The first hillclimb, and those that followed, were sanctioned by the American Automobile Association. Leaving their mark on the hill were the best drivers in the world as all the major manufacturers from Europe and America sent their top teams to compete. Among others, some early notables included Indy 500 winner Ralph DePalma (Fiat), Louis Chevrolet (Buick), D.Bruce Brown (Mercedes Benz), William Haupt (Chadwick) and the legendary Barney Oldfield.

The enormously popular race at the mountain continued, until abruptly stopping with the advent of “The Great War.” The hill then remained quiet as the Nation became preoccupied with the war, only later to suffer through the long, exhausting depression followed by the even greater tragedy of World War II.
With the influx of sports cars into the United States during the late 1940’s and ‘50’s, East Northampton hill then woke again as enthusiasts became anxious to “spread their wings” and sought opportunities to run their cars at speed and in competition with those of like mind. Enter the folks of the SCCA’s Philadelphia Region who took an interest in reviving the event that was described by the Wilkes-Barre Record as “the most severe hill climbing course on which an automobile race was ever run in this country.” The name was changed from “The Memorial Day Hillclimbing Derby” to “Giants Despair Hillclimb.” The course runs a mile in length with a 650’ vertical climb of which the last one-quarter mile rises at more than 22 degrees. Today’s famous “Pike’s Peak” hillclimb has a maximum incline of only 14 degrees.

During the early 1950’s the SCCA crowned only one National Champion. Several road race and hillclimb events were selected from around the country as counting for national championship points. Giants Despair Hillclimb and nearby Duryea Hillclimb in Reading were among those chosen. At the same time, a road-race course with the strange sounding name of Brynfan Tyddyn was built on a farm property just west of Wilkes-Barre. The road race and hillclimb events were organized as a combined weekend affair as National Championship points were given for both events – Brynfan Tyddyn on Saturday with Giants Despair on Sunday. Among the best SCCA drivers from the entire country who challenged the mountain were Lex DuPont, Briggs Cunningham, Roger Penske, and Carroll Shelby who was the first to break what was thought to be the “impossible” minute mark. Other notables that ran the hill at the time were broadcaster Dave Garroway and daredevil Evil Knevil. In 1977, well known driver Oscar Koveleski lowered Carroll’s record by running a blistering 44.127 second time in a Can-Am McClaren – a record that stood for fifteen years. The current hill record was set in 2001 at 39.000 seconds by Darrel Danko on a newly paved and improved course. The book, Sports Car by Austin Conley, published in 1954 lists the top ten international sports car events in the world. Among the ten were LeMans, Sebring, Mille Miglia, Giants Despair and Duryea.
Currently, Giants Despair and Duryea are two of six hillclimbs – plus two track events at Summit Point Raceway – annually run as part of the SCCA’s NEDIV Time Trial Series coordinated by the Pennsylvania Hillclimb Association. Regional members of the PHA include: Blue Mountain, Northeast Pennsylvania, Susquehanna, South Jersey, Steel Cities and Philadelphia. While today’s events at Giants may lack the international stature of those that pre-date the First World War or those National Championship competitions of the 1950’s, Giants is still alive and well – offering the same excitement and challenges for the drivers while entertaining the thousands of spectators who show up year after year to see and hear the race cars “running the hill.”